It’s been both a long and short week. I don’t know how that works, but it does! More importantly, I was astonished to see that I haven’t written a post in over a year. Oops.

Moving right along….I joined an awesome Facebook group called Band of Dystopian Authors and Fans. This is an awesome group of people, some of them bestselling authors, who all share many of the same interests and ideals. Our moderators keep us entertained with discussion questions, giveaways, and random commentary. Every has been a team player so far and the atmosphere is welcoming and encouraging. I recommend it to anyone who loves dystopian literature.

Since it is October, I am costume planning for both the boys and myself. I want Tristan to be Toothless from How to Train Your Dragon and Graham will be Hiccup. I am pretty excited about their costumes since I don’t think they’ll be too difficult, yet look awesome. Plus, they can re-wear them for Graham’s HTTYD party in December. I will be sort of sad when they want to choose their own costume ideas. 😉

Here are my preliminary drawings for the boys’ costumes. I really wanted to make him the Hiccup costume from HTTYD 2 because it’s awesome, but I think it’ll be too tight for his big ol’ belly and too much work and detail for something he is going to outgrow soon. Instead, I’ll make it for me sometime. Instead, Graham can be Hiccup from the first movie. The costume will be a lot simpler. I doubt he’ll keep the helmet on his head, but I can make a strap for it to attach to his back or just go with a shield instead. Other than that I just need brown boots, fur vest, green shirt, and a belt. Easy! 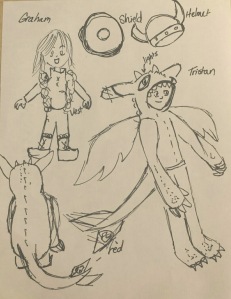 Toothless will be a little trickier, but I’m connect the entire thing to a black zip-up hoodie to make is a little easier. I’m hoping to use painted pushlights for the eyes so they actually light up. I have various black materials to create scales. I’m excited about the clawed hands because I hope he can wear them all winter as gloves. I’m collecting supplies and starting this weekend. Wish me luck!

My costume is not going to be too hard. I’m going to begin practicing with FX makeup. I’m a big fan of the show FaceOff on SyFy and am beginning to collect my own makeup kit. I’ll be a steampunk zombie for Halloween so I can focus on makeup. I already have some outfits in my closet that can qualify as steampunk so I’ll wear that and layer item and gross zombie effects on top.

Steampunk is an interesting movement that appears in style, music, movies, and literature. If you haven’t heard of Steampunk, basically it is as if Victorian period style existed in the future. Read more about Steampunk here! Of course there are different genres, but all of it is unique!

Last Thursday I went to Milwaukee’s 4th Annual Steampunk Ball and Marketplace with my sister. It was crazy! I was a little overwhelmed, but it was fun. Not only was there live music, but an awesome show by Deadman’s Carnival. They had some comedy routines, juggling, magic, fire eating, and someone escaped from a straight jacket while hanging upside down above the floor. They are great!
They also had a guest performer called Tomahawk Tassels who is a premiere Burlesque performer. She was very pretty, but honestly I have never seen a Burlesque performance before and was a little uncomfortable (especially when my sister left me alone to go use the bathroom during Tomahawk’s performance!). Her outfits were awesome and vintage!

I thought my outfit was pretty good! I threw it together at the last moment and most of the items were borrowed, thrifted, or handed down. It was fun! 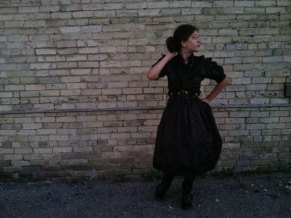 My sister’s costume. Her dress is from Peru! 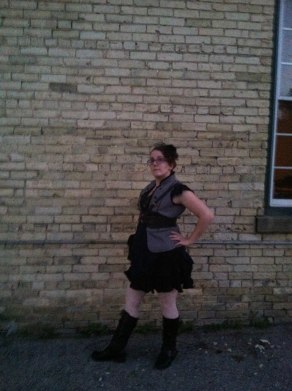 Search for posts on THE KATY

THE KATY was given an award for one of the best YA book blogs of 2015!

JOIN ME IN UTOPiA